Kaseda-shirakame What is unique about this group of people is a cultural practice described as “ritualized homosexuality” and semen ingestion with pubescent boys.

They have a strange rite of passage which involves the initiation of boys at an early age to transform them into warriors.

As early as between ages 6 and 9, boys are removed from their mothers forcibly amidst threats of death if they are unwilling to leave their mothers or a mother is probably unwilling to be detached from her son due to emotional attachment.

The practice is reportedly so violent that the children are beaten and stabbed in their nostrils with sticks to make them bleed profusely. This particular painful act is said to be a symbol of strength and the boy’s ability to sustain pain since the primary objective is to groom them into warriors.

Having removed the boys from their mothers in a hostile and obviously traumatic fashion, they are then hit with stinging nettles before being dressed in ritual clothing and forced to suck on ritual flutes.

The process of affirming one’s manhood is not just a one-off thing. Reports say it can last from 10 to 15 years until the young men father a child. 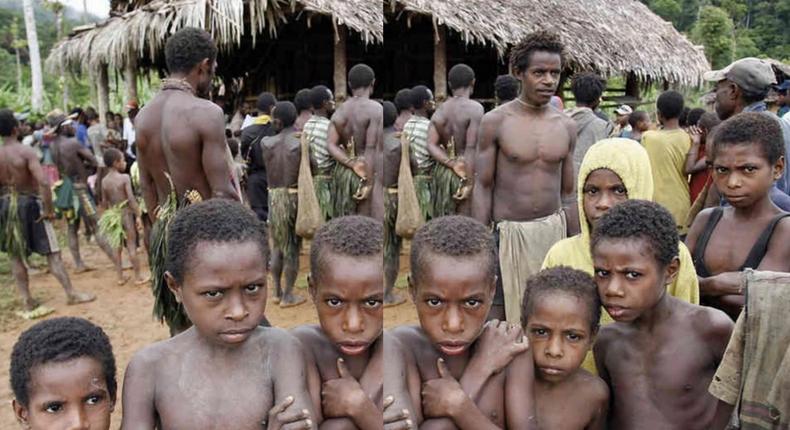 Men are taught at a young age that women have the ability to manipulate and weaken men hence the need for men to distance themselves from women.

It is so serious that the men go through rites of passage to learn how to safely have sexual intercourse with women without getting trapped and emasculated.

Sex between a Sambia man and a woman is solely meant for procreation, so if it doesn’t result in pregnancy, it is considered a waste of the semen.

The women are also separated from the men when they go through their menstrual cycle, a period within which they stay in a designated place called “menarche hut” because of the belief that the women’s powers to manipulate and weaken men are strengthened during this time.

Meanwhile, the good thing is that modernisation has reportedly caused a substantial alteration to this conservative cultural practice, and men and women can now hold hands and engage in heterosexual activity.