Oni Adaba broke the news on social media in an Instagram comment section. According to her, Ken left their matrimonial home 10 months ago, abandoning her in trauma and pain. She also alleged that her husband never touched her for once in their marriage. 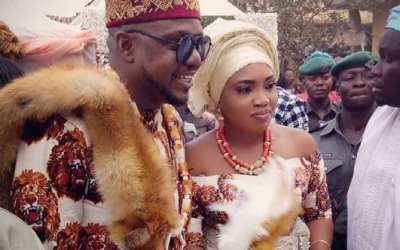 Newsmen reached out to Ken Erics through a phone call, regarding the reports on his broken marriage and he maintained that ‘the truth will come out soon’.

Hear him: “I don’t want to talk about this at all. People should believe what they want to believe. Lies don’t last. The truth will come out pretty soon.
Roping me with Rachel Okonkwo is another stupid thing to do. It doesn’t make sense at all. That’s the height of naivety. I’ll clear my name off all these rubbish but not now. I’d do that at my convenient time. I know the internet never forgets that’s why I would clear the air at my convenient. Let me give this sometime to die down. It won’t take more than one week. The dust it raised will settle.”

Meanwhile, Rachael Okonkwo has also opened up on his relationship with the actor, as fingers keep pointing at her for causing his marriage so much harm.
The actress said he never had any affair with Eric and thus, could not be responsible for his crashed marriage.
Rachael said she and Eric had been friends for years and had good relationship, saying she felt bad about his recent marital issues and prayed God to give him wisdom to hand the situation.