Depending on their traditions and cultures, there are many different festivals that people take part in but it is doubtful that any of them can be compared to the South Korean Mud Festival in terms of its weirdness.

This festival, also identified as the Boryeong Festival, is done every July of every year.

And it brings people  from all over the world to witness the activities. 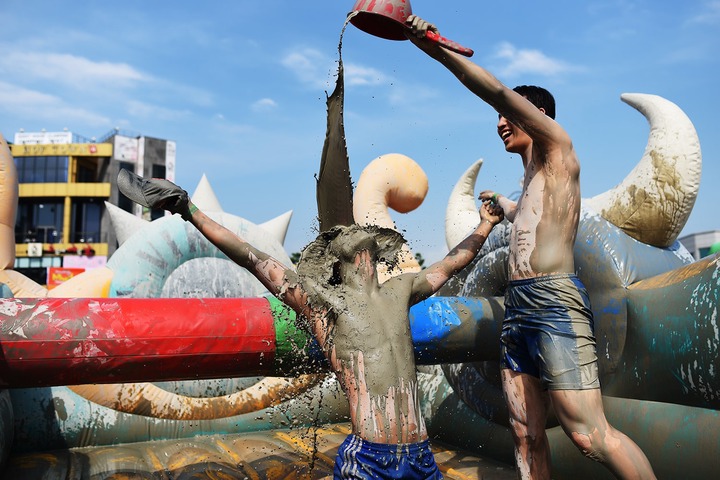 The theme for the festival is “Mud,” hence, there is a surplus amount of this found there, which is why youths run themselves in mud; they also swim, dance, and play in the ground. But, why do so many people partake in such a childlike activity?

The theme for the festival is “Mud,” hence, there is a surplus amount of this found there, which is why youths run themselves in mud; they also swim, dance, and play in the ground. But, why do so many people partake in such a childlike activity? According to CultureTrip, the festival’s history dates back to the olden days when the South Korean government wanted to sensitize the people about the importance of mud as a cosmetic alternative.

Culture Trip sourced that the mud contains essential chemicals such as germanium and bentonite, which are very useful in treating skin related infections and very important for cosmetics. However, as years passed by, the festival has transformed from its function of cosmetic awareness to a fun-filled annual event for South Koreans and enthusiastic tourists. The event takes about two weeks as it starts around the 21st of July to 30th. With the participants evenly distributed throughout Daecheon Beach and downtown Boryeong, the festival kick starts in the morning. It offers several fun activities for tourists, including mud massage, mud pool, mudslides, mud baths, and several other mud-related activities.

There is also a mud race for anyone feeling the heat of Athletics. Hundreds of people in up at the starting point to run a race of about 100 meters across the bridge, and the winners even get a compensation prize because it’s not easy running across the mud.

Below are more pictures from the festival: Surprisingly, this event is a revenue source for the government, and it generates millions of Won yearly. There is an acceptance fee of about 10 to 20 thousand Won, which serves as the only form of payment required to gain access to the festival. But then, why would anyone pay as much as ten thousand Won to play with mud? That is because the mud play is not the only thing that can be enjoyed at the festival. Hence, the fun is not limited to the mud activities, though, because the opening and closing events of the festival features a series of pop star performances. The famous Gangnam Style band is sometimes also featured at the event. By nightfall, people gather around at the beach to watch the enormous fireworks display, which is so colorful that one would wonder if those fireworks were explicitly made for the festival and nothing else.

Hello, all the cricket enthusiasts, finally your favorite and highly anticipated league Abu Dhabi T10 is all set to make their admirers feel over the…

A man allegedly told his four-year-old to fire at police when he was being restrained for losing it at a McDonald’s drive-thru. Saadat Shamille Johnson,…

Hello, all the TV drama lovers, finally your favorite daily soap Udaariyaan is set to make you feel over the top again through the 8th…