They insisted that open grazing should stay or the governors should provide land for the herdsmen in their respective states.

Delta State would not be terrorized by Fulani herders if they terrify any portion of Nigeria’s south. The group’s reported open letter to the state governor on Sunday is nothing more than a threat.

There are various reasons why the threat will never be realized. Dr. Ifeanyi Okowa, the state governor, was purportedly warned by the killer herdsmen to invade his state because of his stance on open grazing in the southern portion of the country.

Last month, governors from the southwest, south-south, and southeast regions gathered in Asaba to discuss the region’s ongoing herdsmen attacks. The governors of the states have unanimously decided that open grazing is prohibited in their jurisdiction. 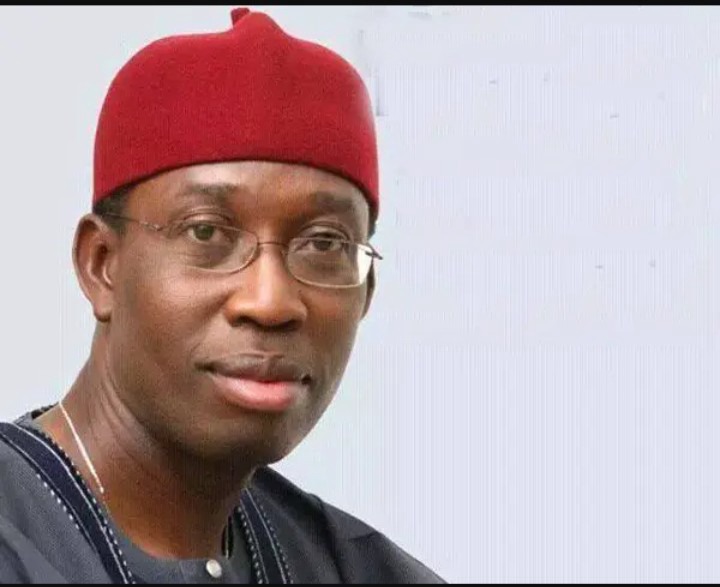 The resolution of the meeting was formally conveyed to president Muhammadu Buhari. The matter later became a major debate in the public as Miyeti Allah association took a stand against the decision. They insisted that open grazing should stay or the governors should provide land for the herdsmen in their respective states.

They became more emboldened on Thursday last week after president Buhari spoke against the governors’ decision saying that killer herdsmen are not Nigerians but foreigners who came into the country with their cattle through the land borders. He made the assertion during his media parley with Arise TV Journalists who visited him in his Villa. 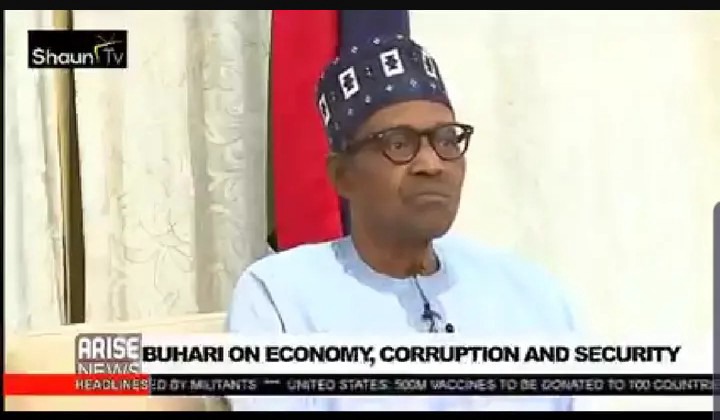 Buhari’s comment had shown the position he is taking over the matter and that appears to have given the cattle rearers the gut to issue a threat to the Delta State Governor and his people to lift the ban on open grazing or face a deadly attack on the State. This was contained in their open letter which had since gone viral on social media. 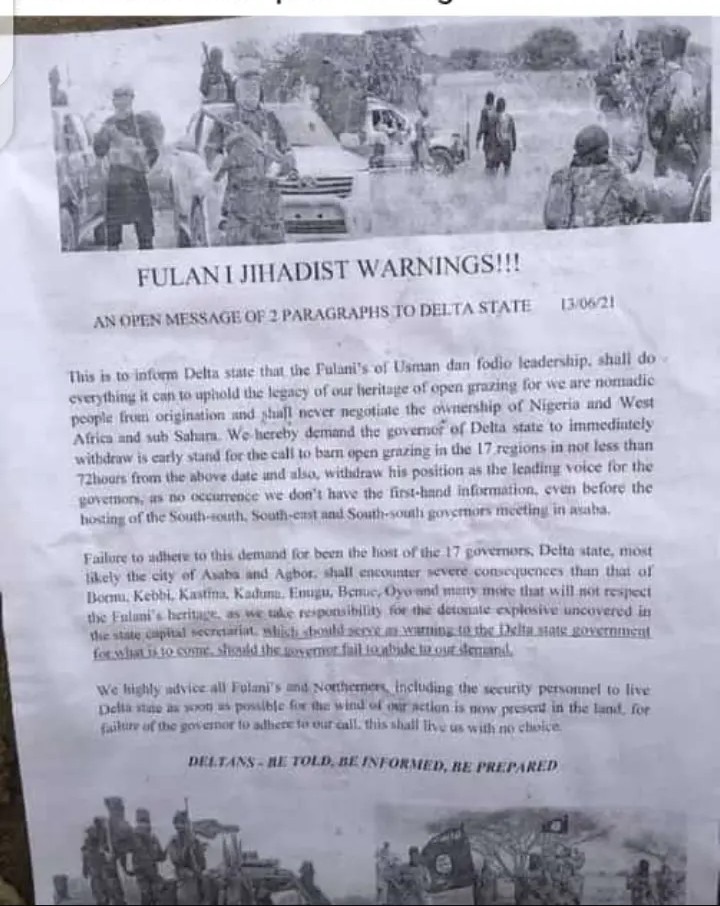 However, the Fulani herdsmen seem to have forgotten that the way they attack people in other states and get away with it, cannot be the same in Delta State. Here are the two reasons.

In the first place, Delta is the home of militancy. There are more deadly youths who are not mindful of Death in Delta. These are guys that have become a terror even to the soldiers or any other security operatives around the creek.

Advertisement. Scroll to continue reading.
See also  My rich girlfriend cheated on me twice, I want a break-up but she pays my rent and got me a job – Man cries out

These guys live on the creek and are always ready to strike at any given opportunity. They have thrived on this kind of conflict for many years. The fact that Niger Delta militants have kept quiet in the last two to three years does not mean they are completely out of circulation. 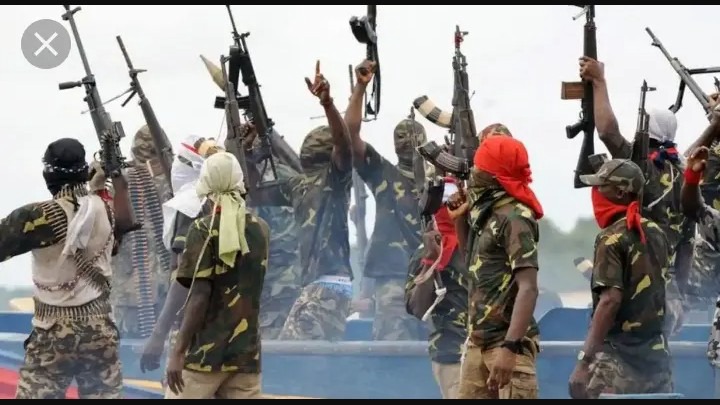 They are only keeping their cool for peace to reign in their region and the country at large. They were actually begged and pacified by the government after their attempt to make the country ungovernable for President Buhari in the early days of his administration.

The militants at that time vowed to destroy the national assets in their region. So many oil companies and escavos were burnt at that time. And the entire nation was almost held to ransom because of their activities. Even the Nigerian army could not curtail them. 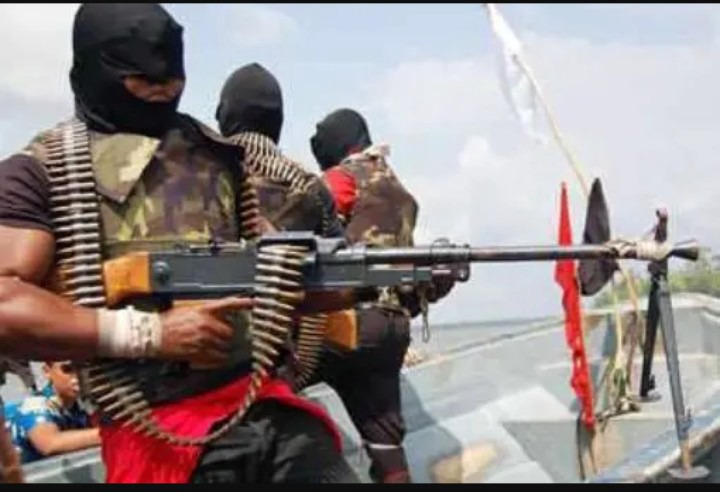 It took the intervention of some leaders in the region among who were Politicians, royal fathers, and notable individuals to pacify them for peace to reign.

For Fulani herdsmen to now be threatening them with an attack is like stepping on the tail of a hungry lion. If they try anything stupid, the Niger Delta militants will make sure every living Fulani man within the region is a dead man.

And this may lead to a major tribal conflict in the country. The herdsmen are obviously aware of this. So, they can never carry out their threat.

The second reason has to do with the geographical terrain of the region. Unlike other states where there are forests, what they have mostly in Delta is a river. If herdsmen invaded any part of the state, they can never have an escape route. They will be caught even before making an attempt to escape. 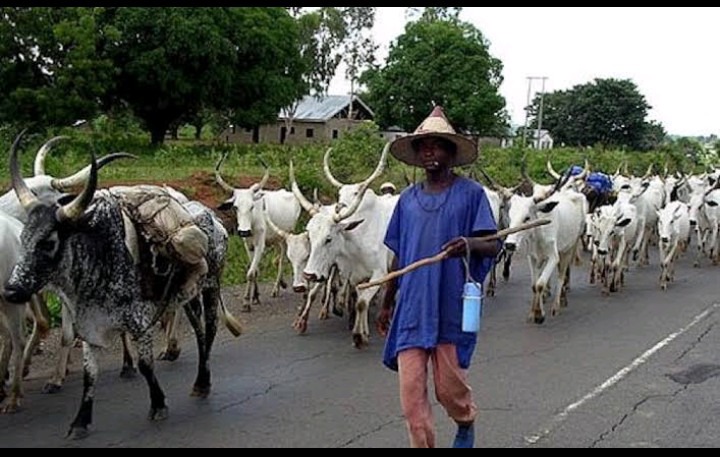