Another coronavirus variant that could dodge vaccine-triggered immunity has been identified in the UK, scientists say.

The strain — called B.1.525 — has been spotted 33 times already but experts say this could be a huge underestimate.

It shares the E484K mutation found on both the South African and Brazilian variants, which make the current crop of jabs slightly less effective.

The variant also carries the Q677H mutation on its crucial spike protein, prompting warnings from scientists that this could make it even more resistant to vaccines.

And there are some similarities to the Kent strain, which studies show is up to 70 per cent more infectious.

The B.1.525 variant was first detected in Britain in mid-December — but this doesn’t mean it evolved here. The UK does far more sequencing than other countries.

The strain has already spread to 11 countries including the US, Canada and Denmark, which are not on the UK’s ‘red list’.

Britain has identified several Covid variants since the pandemic began, including the more infectious Kent lineage — called B.1.1.7 — which is the dominant strain.

The South African variant — B.1.351 — has also been found, sparking mass testing in dozens of areas to prevent larger outbreaks. Other troublesome strains have also been spotted in Bristol and Liverpool.

But although some genetic changes have been found to make vaccines slightly less effective, experts say everyone should still get vaccinated because the jabs should prevent serious illness and death from the disease — even if they don’t stop people falling ill. 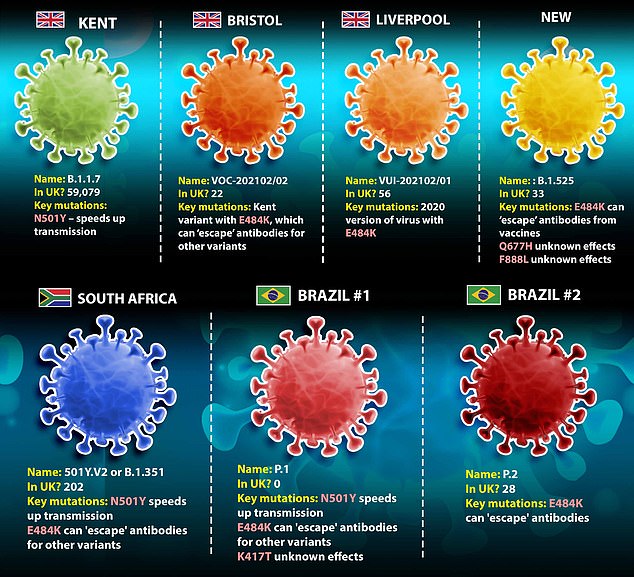 The above map shows where the strain B.1.525 has been detected in the world. It was first identified in the UK and Nigeria in late December

Covid-19 constantly evolves, which could spark the need for booster shots this Autumn in the vulnerable or the need for winter vaccine campaigns like those for influenza.

Variants of the virus contain dozens of mutations, but not all of these spark concern among scientists.

Nonetheless, a handful of troublesome ones have prompted officials to carry out door-to-door testing in some parts of the UK.

Studies have shown vaccine-triggered antibodies may be less able to destroy some variants, sparking fears that the rollout will be unsuccessful.

But not all immunity is based off antibodies, scientists say, meaning it is unlikely any of the variants will render the current crop of jabs useless.

The new variant was revealed in a report by scientists at the University of Edinburgh, who said it also had the mutation F888L. Experts say they are not sure whether this gives it an advantage.

Denmark has spotted the most cases of the strain (35), followed by the UK and then the US (10). The strain has also been detected in Jordan, France, Belgium, Ghana and Spain. None of these countries are on the ‘red list’.

Scientists have appealed for calm over the new variant, saying there is no evidence it is more infectious or more deadly at present.

Professor Jonathan Stoye, a virologist at the Francis Crick Institute, warned it was not surprising that the new variant contained some mutations already seen.

‘The minute you start putting selection pressure on this virus, you start selecting particularly for things that give it the ability to escape immune responses, and I think that is what we are seeing here,’ he told The Guardian.

‘This [E484K] change seems to be the key change at the moment to allow escape, so that’s the one you put into the tweaked vaccine.’

When asked by MailOnline about the other mutations, he warned the Q677H change may impact the effectiveness of antibodies by changing the shape of the spike protein – which the immune system recognises as a threat and tries to snuff out. Any changes in shape could allow the virus to evade detection.

Above is the number of cases identified by country. In areas where more genomes are checked for variants of the virus, it is likely more cases will be detected

Above is the number of times cases have been found since the first variant was reported by country. It has been most common in Nigeria, Jordan and Ghana this shows

Dr Simon Clarke, a cellular microbiologist at the University of Reading, told MailOnline that it was not yet clear what impact the new mutations besides E484K would have.

But he warned it was ‘entirely possible’ a new mutation would soon emerge that would affect T-cell immunity — although there is no evidence that the new variant impacts this response.

Part of the T-cell immune response is to destroy infected cells in order to stop the virus from reproducing and spreading, thereby curbing an infection.

When the virus enters the cells it leaves proteins on its surface which, when detected by T-cells, lead to them identifying an infection and destroying it.

But a mutation triggering a change in the shape of these proteins, would mean the T-cells would find it harder to identify and destroy infected cells – impacting immunity.

MailOnline has approached the Department of Health for comment.