Now that John Humphrys has called it a day, I’ll never get the chance to be quizzed by him on Mastermind.

Pity. I’ve lost count of the number of times I’ve wondered what my specialist subject would be. Motown B-sides of the 1960s, maybe. The lyrics of Warren Zevon.

Minder, 1979-1994. The inside story of the great Transport and General Workers’ Union ballot rigging scandal, 1985.

As chairman of the Useless Information Society, a distinguished position I inherited from the late Keith Waterhouse, I am a veritable repository of worthless trivia.

For instance, my encyclopaedic knowledge of old British television series is fairly extensive, as regular readers can attest.

I can recite entire episodes of Whatever Happened To The Likely Lads. I’m word perfect when it comes to The Sweeney. 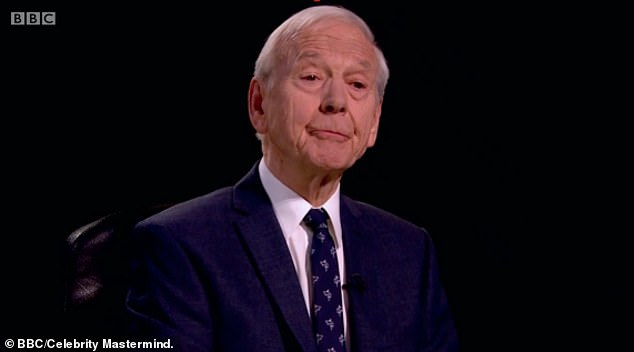 Now that John Humphrys has called it a day, I’ll never get the chance to be quizzed by him on Mastermind

I can still remember Cherie Lunghi’s hairy armpits on Bill Brand, a long-forgotten ITV show from the 1970s about an idealistic Leftie Labour MP, played by Jack Shepherd, of Wycliffe fame.

I’m probably one of half a dozen devoted fans of Turtle’s Progress, a fabulous series about small-time duckers-and-divers, set in South London, which predated Only Fools and Minder. It starred John F. Landry as Turtle, Michael Attwell as Razor Eddie, and Ruby Head as Aunt Ethel.

You can’t find it anywhere on television these days, although — you won’t be surprised to learn — I’ve got the box set.

The reason I’m telling you this is that, try as I might, I have absolutely no recollection of Rogue’s Rock, which ran for three series between 1974 and 1976.

Perhaps I was washing my hair that night.

I had to look it up. Apparently, it was a ‘comedy adventure’ set on a private island off the South Coast and revolved around a search for sunken treasure. Among the featured actors you may have heard of, Rogue’s Rock starred Philip Madoc as Spinetti. Or was it Victor Spinetti as Madoc? No matter. 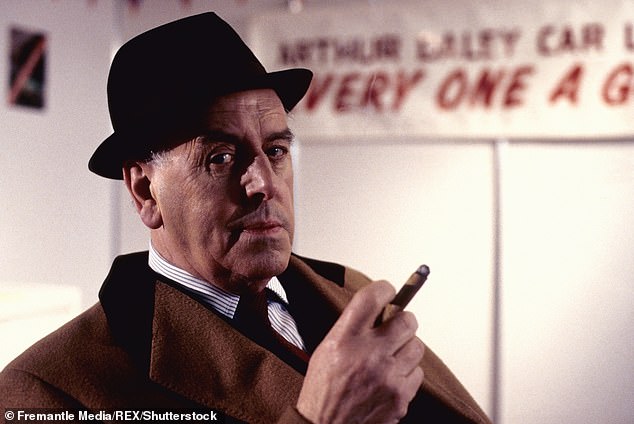 Pity. I’ve lost count of the number of times I’ve wondered what my specialist subject would be. Motown B-sides of the 1960s, maybe. The lyrics of Warren Zevon. Minder, 1979-1994 (pictured). The inside story of the great Transport and General Workers’ Union ballot rigging scandal, 1985

What intrigued me was that it also showcased an actor/comic called Chubby Oates, who started out as a newspaper reporter on the South London Observer, where he shared an office with my old friend Kelvin MacKenzie, briefly of this parish. Small world, eh?

Chubby Oates was a spectacularly filthy comedian. These days his material would probably get him arrested for hate crime.

Anyway, long story short, Rogue’s Rock — which is currently being repeated on the oldies channel Talking Pictures — has just fallen foul of the TV watchdog Ofcom, 47 years after it was first broadcast.

But, curiously, Chubby Oates isn’t to blame. Ofcom has taken exception to an episode shown on Boxing Day which featured an actor in blackface. The regulator has launched a formal investigation after receiving just one — yes, one — complaint. If it is upheld, the channel, which was started by a father and daughter in Watford, could face a hefty fine.

For the record, I’m not defending blackface. Or denying that the game has moved on since the 1970s. No one in their right mind would make Love Thy Neighbour, Mind Your Language or The Black And White Minstrel Show these days.

But one complaint? They must have been the only person in Britain watching Rogue’s Rock on Talking Pictures on Boxing Day. So why is Ofcom taking this seriously? 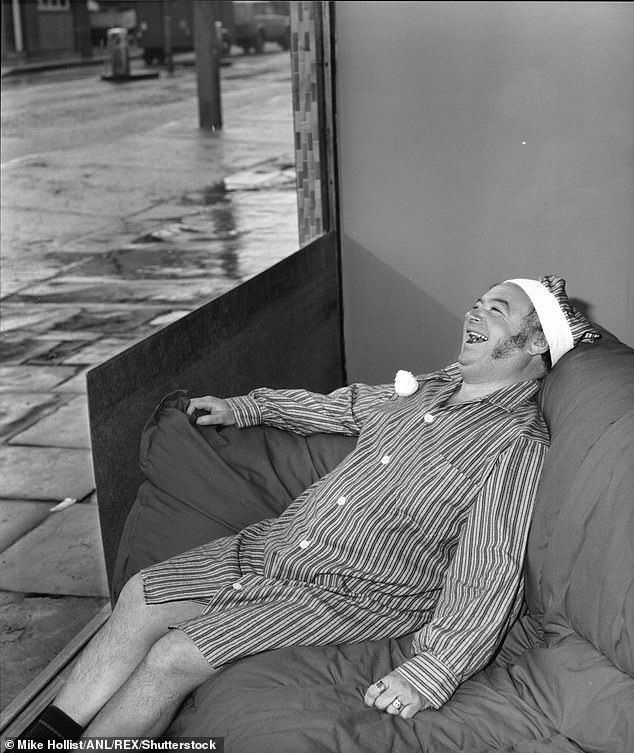 Chubby Oates was a spectacularly filthy comedian. These days his material would probably get him arrested for hate crime

Don’t just ask me, listen to the former BBC chairman Michael Grade. He has written to the regulator calling the decision ‘a serious error of judgment and a worrying precedent’.

Grade says the investigation into Talking Pictures — which attracts 3.5 million viewers a week — seeks only to ‘patronise, infantilise and demean the intelligence’ of the audience.

He accuses Ofcom of taking sides in the culture war being waged by the woke Left, which is hell-bent on erasing the past.

Grade’s right, of course. But what else have we come to expect from the Establishment, which has caved in at every turn to statue-toppling Black Lives Matter headbangers and other associated revisionists?

Last week, it was Churchill’s turn in the ducking stool. This week, Talking Pictures, a quaint television channel devoted to screening nostalgic movies and TV series.

Talking Pictures is already forced to preface almost every single programme with a ‘health warning’ — advising viewers that they may be offended by some of the ‘outdated’ language and opinions about to be broadcast.

Why? Nobody who watches Talking Pictures in the normal course of events is likely to be in the least bit ‘offended’.

How come only millennials and Lefties are allowed to be ‘offended’? How about the offence caused daily to the rest of us?

When will we see a health warning before every televised football match? ‘The following programme contains images of players taking the knee, and prominent Black Lives Matters banners on every grandstand, which some viewers may find offensive.’

Or Newsnight? ‘This programme contains smug Left-wing drivel, which licence-payers may find offensive.’

Or most TV dramas? ‘The next programme contains gratuitous scenes of nudity and sexual intercourse which are utterly irrelevant to the plot.’

Or most terrestrial TV cop shows? ‘This programme contains images which would have you believe that all senior police officers are female and only investigate cases of missing children murdered by racist white men, who are all rapists and paedophiles.’ And don’t get me started on the adverts!

To be honest, I find almost everything on terrestrial TV offensive. Sky News and Sky Sports News Black Lives Matter are just as bad these days. I’ve given up watching either of them.

Call me old-fashioned but is it any wonder increasing numbers are seeking refuge in Talking Pictures, the least offensive channel on TV? Let’s just hope they get round to showing Turtle’s Progress one of these days.

Thanks for all your kind words about my Saturday Essay and the Mail’s brilliant investigation into the Scotland Yard Paedos In High Places scandal.

We mustn’t forget the monstrous collateral damage inflicted by the thuggery of Operation Midland.

Not least the young couple whose only ‘crime’ was to live in a flat above the falsely accused former Tory MP Harvey Proctor on the Duke of Rutland’s estate, Belvoir Castle.

Police who raided the property turned up with a social worker and threatened to take their baby into care, simply because they knew Proctor.

In yesterday’s Mail, the Duke joined the condemnation of the Yard, telling Stephen Wright: ‘There have been three occasions that Belvoir Castle has been invaded: in the Wars of the Roses, the 17th century Civil War and in March 2015 by the Metropolitan Police Service.’

It’s a pity the Duke didn’t respond in War of the Roses style and pour boiling oil from the battlements on to the invading Plods below.

Despite the impressive vaccine rollout, we could still be forced to wear masks — possibly for ever, just as I warned you a couple of weeks ago.

Still, every cloud. Millions of jobs may be gone for good, but there’s never been a better time to be a ventriloquist. 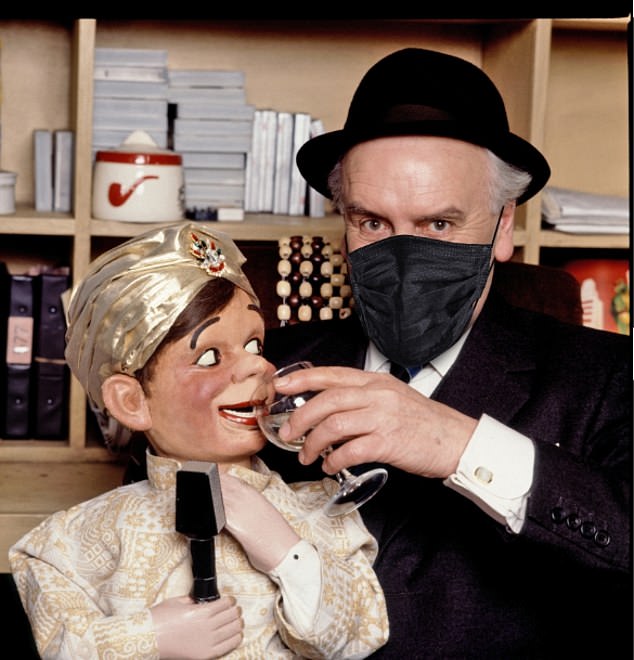 Millions of jobs may be gone for good, but there’s never been a better time to be a ventriloquist

Rail chiefs have come up with a novel plan to overcome the controversial border in the Irish Sea.

They’re proposing to build a 23-mile long tunnel between Scotland and Northern Ireland, from Stranraer to Larne.

Maybe when Swampy and his mates have finished digging under the Euston Road they could give him the contract.