Ejiofor, who sent the alarming tweets early Sunday morning, June 6, claims he done nothing wrong and that this could be his last communication.

Barr. Ifeanyi Ejiofor, the lead lawyer for Nnamdi Kanu and the Indigenous People of Biafra (IPOB), has cried out for his life on Twitter, stating that agents from the Nigerian Army and Department of State Services have entered his residence and are shooting randomly.

Ejiofor, who sent the alarming tweets early Sunday morning, June 6, claims he done nothing wrong and that this could be his last communication.

“Alert .Joint team of the police and Army are presently in my house shooting sporadically on sight, to arrest me. As a lawyer i hve committed no offence known to law. My life is unde serious threat . People are being killed and i don’t know what will happen to me next.”

“Pray for me and my entire household.You may not hear from me again till further notice.” 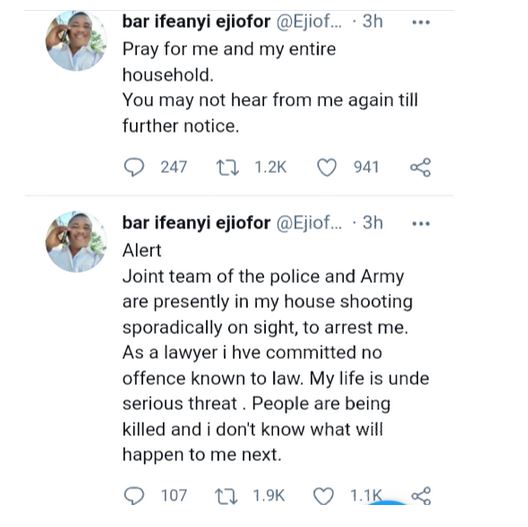 Nnamdi Kanu and Femi Fani-Kayode have reacted to his distress tweet.

“The world MUST be put on notice that for the second time, the country home of Barrister Ifeanyi Ejiofor has been surrounded by @HQNigerianArmy, @PoliceNG & DSS in a bid to assassinate him. It is imperative that this latest provocation is stopped. This is why they banned @Twitter.” 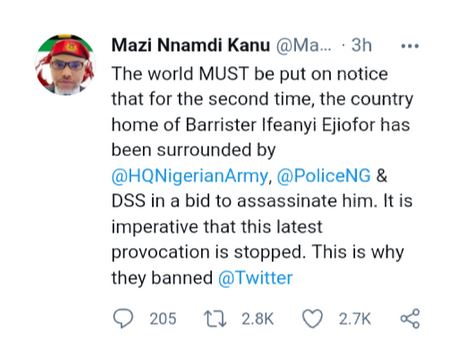 FFK on his part, wrote;

“I just spoke with Barrister Ifeanyi Ejiofor who is one of my lawyers & a lawyer to IPOB & @MaziNnamdiKanu. He told me that his Anambra home has been flooded by soldiers, policemen & DSS operatives & that they are shooting in an attempt to kill him.For God sake stop the violence!.” 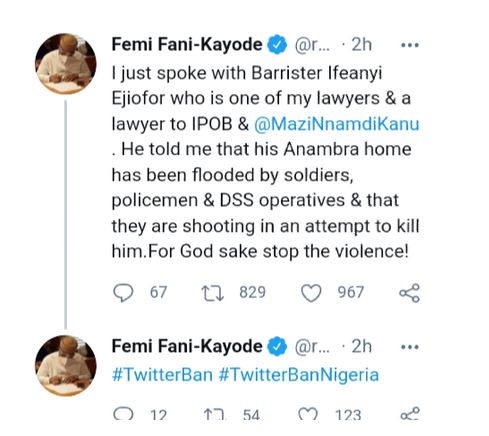 About Harry Choms 3079 Articles
Harry Choms is a content writer who is passionate about ICT, entertainment, politics and social media trends. Harry holds a BSc in Geography & planning, a PGD in information Technology and an MSc in Computer science. When he is not writing, he is either checking out latest tech developments or reading.