Matt Hancock clashed with Piers Morgan today after the Good Morning Britain host slammed his ‘woeful handling of the pandemic.’

The pair came to blows on GMB after the Health Secretary insisted his team should be ‘thanked’ for their hard work.

As the furious debate heated up this morning, Piers accused Hancock of telling a ‘barefaced lie’.

He added: ‘We have nearly 1,000 health workers who have died on the front line. I don’t know why I should be thanking you. You should be apologising.’

The Health Secretary faced criticism after claiming that there was ‘never’ a national shortage of personal protective equipment (PPE) ‘because of his team.’

Pfizer today insisted their coronavirus vaccine deliveries are on track, hitting back at Matt Hancock after he warned supply issues would slow down the roll-out this week.

The Health Secretary claimed a delay in the supply schedule will result in fewer jabs being dished out. But he also said there would be some ‘bumper weeks in March’ to make up for the lag.

Both Pfizer and AstraZeneca — manufacturers of the jabs currently deployed in the UK — say there is no issue with deliveries.

Pfizer sources today told MailOnline there were ‘no supply challenges’ and deliveries were arriving as planned. AstraZeneca yesterday admitted there were ‘fluctuations’ in supply at plants but that it was still ‘on track’ with orders.

Official figures showed Britain only administered 150,000 vaccines on Sunday, in the worst daily performance since the NHS roll-out began to gather speed last month. The number of first doses dished out has dropped by 40 per cent week-on-week.

With a rapid inoculation drive crucial to Britain’s hopes of lockdown being eased in the next few months, critics say there is ‘no excuse’ for the rollout slowing down.

Think-tank bosses believe it is unlikely supply is solely behind the downturn because there would be reports of centres across the country running out of stock — which hasn’t been the case.

Boris Johnson put a successful vaccine roll-out at the heart of his lockdown-easing plan, which he unveiled yesterday. So long as the operation continues successfully, all restrictions could be dropped in England by June 21. Any hiccups could threaten that target.

Britain is racing to give as many first doses to over-50s as possible before the end of March, when millions of second jabs must be rolled out — which will inevitably slow the operation. The PM has pledged to jab all 32million in the top nine groups by April 15 and every adult by the end of July.

Mr Hancock replied: ‘I think we should be on this programme thanking my team. They work so hard.’

Piers replied: ‘Let’s just analyse that. You and your team have presided over a woeful handling of this pandemic that has led to us having the worst death toll in Europe; 130,000 people dead.

‘So I’m sorry if my first thought when you come on..is not to thank you and your team for your brilliant handling of the pandemic.

‘Because I don’t think 130,000 deaths shows you have handled it well. I am sorry I am not thanking you and applauding you.’

The Health Secretary faced criticism after claiming that there was ‘never’ a national shortage of personal protective equipment (PPE) ‘because of his team.’

When Mr Hancock said Piers was cutting him off and said ‘what’s the point of coming on’, Piers hit back: ‘Don’t be so patronising, Health Secretary. We gave you a chance to answer.

‘But when you give a completely disingenuous answer we are going to call you out on it’.

When the Health Secretary directly asked Piers to thank his Whitehall team, Piers added: ‘I am really struck by the fact you feel incensed that we are not thanking you enough for your handling of the pandemic.’

Mr Hancock replied: ‘I am asking you to thank people who spent 18 hours a day, seven days a week to make sure we got the PPE that we needed and saved lives as a result.’

‘We have nearly 1,000 health workers have died on the front line. I don’t know why I should be thanking you. You should be apologising.

‘And your refusal to hold your hands up and say, I am really sorry we have got the worst death record in Europe.

‘Why don’t you say that? Rather than demanding thanks. Say ‘I am sorry that we failed you. I will try and do better’. That is more honest, isn’t it?’

Mr Hancock also defended a decision to hand £30million Covid contracts to a former neighbour and pub landlord now under investigation by the medical watchdog – after discreetly removing a picture of his old boozer from the wall of his study.

The Health Secretary said it would be ‘ridiculous’ to block friends of ministers from public contracts as he was quizzed about the probe into Alex Bourne. 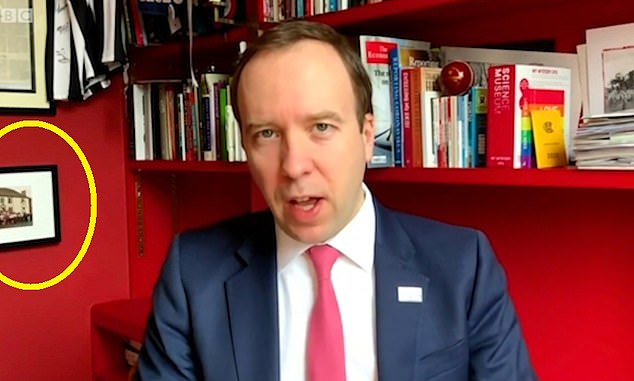 His company, Hinpack, which was originally a packaging manufacturer, won around £30million in work to supply a distributor contracted by the NHS with two million test tubes a week, as well as around 500,000 plastic funnels for test samples.

However the Medicines and Healthcare products Regulatory Agency (MHRA) confirmed at the weekend it has launched a probe into Mr Bourne’s company – which had no previous experience of making medical supplies prior to the pandemic.

A picture of the pub in question was visible on the wall of Mr Hancock’s study when he conducted media interviews on Sunday. But in appearances today including Good Morning Britain, it had been replaced.

Asked about the deals won by Mr Bourne on BBC Radio 4’s Today programme this morning Mr Hancock said he ‘didn’t have anything to do with that contract’, despite claims by the ex-landlord that it came about after exchanging a personal WhatsApp message with the Health Secretary .

‘This has all been looked into in great detail, it’s only because of the transparency that I support that we can ask questions about these contracts,’ Mr Hancock added.

‘The implication of your question about the specific one that you raised is that people should be barred from taking contracts if they know anybody involved. That would be ridiculous.

‘What’s more is that it is easy to ask these questions, but what is hard is to deliver PPE in the teeth of a pandemic and that is what my team did.’