Phylicia Rashad was strangely thrust into a conversation about Bill Cosby and his so-called “enablers” — which the Internet was NOT putting up with … especially on Mother’s Day.

Twitter was celebrating their favorite TV moms Sunday, and Phylicia was right up there near the top of the list … with many remembering and paying tribute to her starring role on “The Cosby Show” as Cliff’s wife, Clair Huxtable. That is, until someone took the convo left.

A lady who goes by Lisa Talmadge rained on everyone’s parade, tweeting a bizarre claim, and didn’t even use Phylicia’s proper name in making it … or her TV character’s name for that matter.

See also  “You Have a Heart of Gold”
Advertisement. Scroll to continue reading. 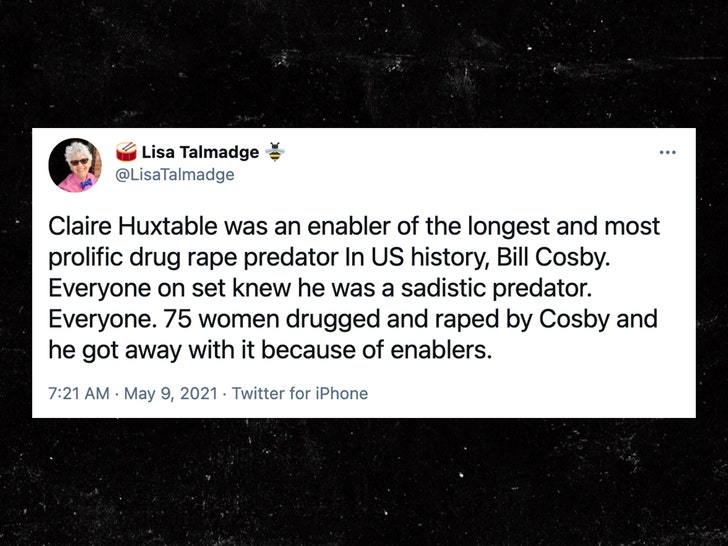 She wrote, “Claire Huxtable was an enabler of the longest and most prolific drug rape predator In US history, Bill Cosby. Everyone on set knew he was a sadistic predator. Everyone. 75 women drugged and raped by Cosby and he got away with it because of enablers.”

For starters, it’s CLAIR Huxtable. Second, Mrs. Huxtable is not a real person (she’s fictional and only exists in the show). More importantly — and as Twitter users furiously noted in response — Phylicia isn’t responsible for what Cosby was accused of, or convicted over.

Neither Claire Huxtable or Phylicia Rashad are responsible for Bill Cosby’s actions. She was his co worker and employee not his supervisor or co conspirator in his crimes. pic.twitter.com/e7jL2XbiAg

As countless people pointed out, Phylicia wasn’t his boss on the set … if anything, she was more of an employee of his, and a co-worker — nothing more. To suggest she knew what was going on behind the scenes — something she herself has already denied — is absurd.

Now, for the record, Phylicia has come to Cosby’s defense … most memorably in 2015 when the sexual assault allegations against him resurfaced, which she brushed off at the time as a group of people trying to tarnish the man’s legacy, and a conviction of guilt in the media.

After Cosby was convicted of assaulting Andrea Constand and incarcerated over it … Phylicia has somewhat softened her stance, but she still seems to equivocate at times. Bigger picture though … she’s defended “The Cosby Show” and has asked folks to compartmentalize.

Regardless of how she feels about it, the consensus appears to be … don’t lump her in with Cosby’s misdeeds.