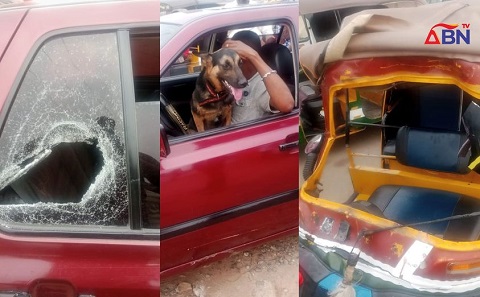 Robbers involved in an accident in Abia

Some suspected robbers have been involved in a ghastly accident in Abia state.

The robbers according to ABN TV were hospitalised following the accident.

The owner of the car who pleaded anonymity had parked off BCA Road Umuahia, Abia State for a brief relaxation while keeping his dog apparently to watch over a wrap containing undisclosed amount of money.

Unknown to one of the robbers who also disguised as a guest in the busy place, a surprise awaited him.

After breaking the side window of the car and stretched his hand for the wrapped cash, the dog reached out for it and gave him a merciless bite on the hand.

See also  Politicians Are Responsible For Insecurity In The Country

His gang members who watched from a distance immediately raised the alarm, attracting the attention of guests around, including the owner of the vehicle.

Upon sighting him, three of them immediately took to their heels while the remaining three jumped into a Keke NAPEP with registration number Ebonyi AKL-832-UM they came with.

In an attempt to speedily escape, they were involved in an accident along BCA road.

An eye witness told ABN TV that the suspects who fled on their heels upon getting wind of what happened returned to the scene, appealing to other road users to help take their accident victim gang members to the hospital.

They were immediately evacuated to the hospital while their Keke which was damaged beyond repair was abandoned.

Men of the Nigeria Police Force from CPS were said to have arrived and began tracing ownership of the Keke NAPEP.

As at the moment of this report, efforts were being intensified to identify the hospital where they are receiving treatment.