A priest in Thailand apparently chopped off his own head as a contribution to Buddha in the expectation he would be reincarnated as a ‘higher otherworldly being’.

Thammakorn Wangpreecha, 68, was said to have been planning the bizarre ritual sacrifice for more than five years before his death.

The monk believed that making the offering to the deity would bring him good luck in the afterlife, a belief known in Buddhism as ‘making merit’.

The monk was found dead on April 15 at the Wat Phu Hin temple in Nong Bua Lamphu province, in north-eastern Thailand.

His nephew, Booncherd Boonrod, who discovered the body said he disclosed his plans in a letter.

Booncherd said: ‘In the letter, it was stated that chopping his head off was his way of praising Buddha. In the letter he said that he had been planning this for five years now.

‘His wish was to offer his head and his soul so that the Lord could help him reincarnate as a higher spiritual being in the next life.’

It was reported that the monk allegedly used a makeshift guillotine next to a Buddhist God statue so that the religious figure would appear to be holding his head after it had been cut off. 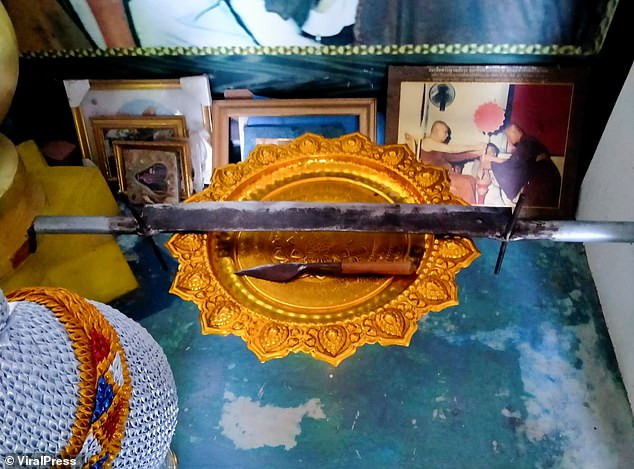 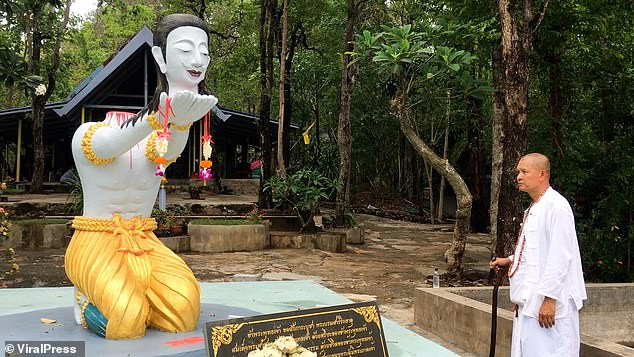 The monk, who had served the temple for 11 years, had allegedly previously informed the other priests that he would be leaving the monkhood but he did not tell them about the guillotine.

Following his death, more than 300 local devotees reportedly showed up at the temple to prepare his body for a rite.

The monk’s body was laid inside a coffin while his head placed in a jar before his followers and family members carried his remains to the forest where it was burned, Mail Online reported.

Yu, one of the monk’s followers, said: ‘He had been planning this for five years now. He fulfilled his goal and met enlightenment.’