Yesterday, June 20 was Father’s day and a Nigerian chef identified as Effizy Code took to social media to prepare a pot of turkey sauce for his mother as he celebrates her for taking care of him.

The young man also took the opportunity to call out African fathers who have shunned their responsibilities and left the task of catering for their families on the women.

“Even if today is fathers day I still dedicate this pot of turkey sauce to my mom a million times over, and I don’t regret saying that cuz she’s the most amazing thing in my life, And I just wish my unborn children won’t say such about me,” he wrote.

“The thing is African fathers should learn to make their kids and children proud of them, cuz u can only give credit to someone who truly deserves it. if u ask 90% of the same thing I just said they will agree with me that most African fathers are not even worthy to be called fathers, with the way they treat our mothers, leaving them to care for the children alone as if the women brought the children into the world themselves,”

“If u are not ready to take full responsibility of a child don’t bother bringing one to the world, in fact tie ur manhood with rope, plz no body should come into my inbox to ask me why I speak in such harsh tones about fathers, whoever want to be called a good father should work on himself n learn to be responsible for his actions.” 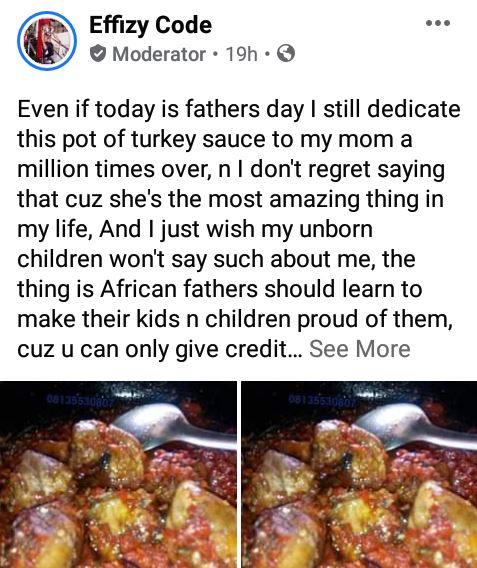