BBNAIJA’s Lilo is apparently in a state of dilemma as she cried out to Biggie during her diary session this evening where she spoke to Big Brother about her love interest in the house, Eric.

Lilo and Eric gravitated towards each other immediately they got into the house and were about the first housemates to start a ”relationship”. Well, it appears she is tired of the whole ”ship” and wants to be out of it. 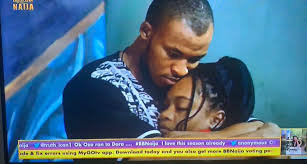 This evening during her diary session, Lilo said she feels she is now being distracted in the game by her relationship with Eric

”So basically when I was coming into the house, I didn’t expect anything but I just kind of found myself being with Eric so much and it wasn’t like what I planned for. I kind of feel a bit distracted as well. I just don’t know.”she said

Weeping, Lilo said she intends to stop sharing a bed with Eric so as to stop the distraction.

Big Brother then advised her to stop sharing the same bed with him if she feels that would help stop the distraction.

Watch a clip from her session below;

Ahhh LILO should better not be confused as NDDC ….Girl you need to stand and start all over! 😃😃 Did I hear we made over? 😩😹🏃‍♀️🏃‍♀️🏃‍♀️🏃‍♀️#BigBrotherNaijaLockdown2020 pic.twitter.com/5cZGiFoRg3