Man Left His Wife After Finding N3.6m In Her Account And Their Son Died Because Of Hospital Bills

This is a very sad story about a couple who lost their son in the hospital because they could not afford to pay the hospital bills as you read further, you might want to blame the man or who do you think should be blamed?

There is this saying that says “Husband’s money is for the family while the wife’s money is hers” this could be the reason why some women don’t spend their money with their families, thereby hoping on their husbands to fully take responsibility in the family.

This could be funny to an extent to see that a woman will have a huge sum of money in her bank account and she can not release it out to pay for her child’s medical bills.

It was gathered that this woman and her husband allowed their sick son to die in the hospital because they could not pay his hospital bills, thereafter, her husband found the sum of N3.6 million in her account.

According to TVC, it says that “Couple loses sick son after they both refused to pay the hospital bills. The wife claimed that her husband has a habit of giving excuses each time monetary issues cones up. Her husband left the house after finding N3.6 million in her account after their son’s death”.

In my opinion, the man must have seen her as a wicked woman that was why he left her.

What is your opinion in this regard?

What can you say about this couple? 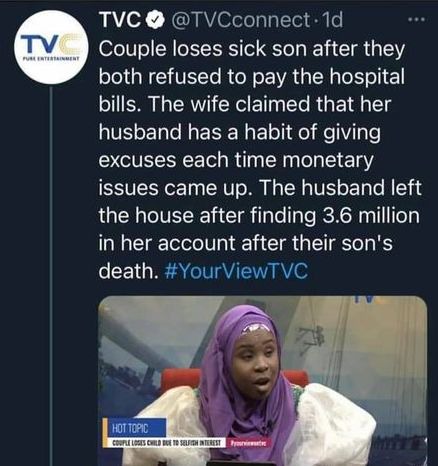