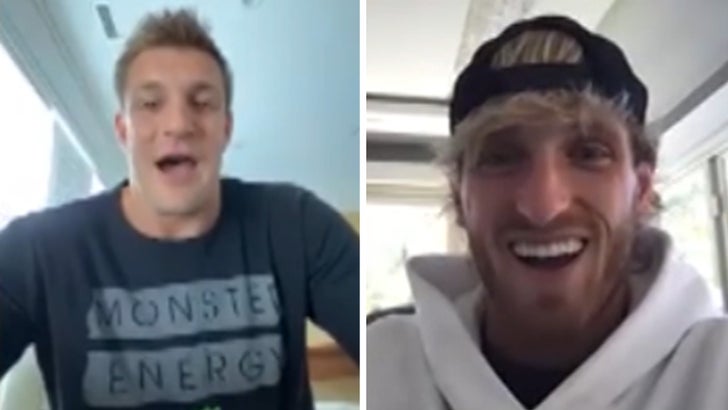 Logan Paul took on FOUR members of the Gronkowski family while training for his upcoming match against Floyd Mayweather … and claims he handled all of ’em!

But, there’s no beef — it’s all love — and Logan and Rob Gronkowski spelled out the whole situation to TMZ Sports.

Rob didn’t actually fight because of that whole football thing he’s got going … which probably makes Tom Brady and the Bucs happy.

But, all 4 of his brothers — Glenn, Dan, Chris and Gordie — laced up the gloves to go a few rounds with Paul back in April … and it seems Rob was genuinely impressed!

The Gronks were trained up by two legendary fighters — Winky Wright and Antonio Tarver … and Logan says his main focus point was avoiding getting rocked!

“They’re massive,” Logan tells us … “I’m f**king 6’2”, 200 pounds and I go in there and all of Rob’s brothers are towering over me! They’re all taller than me vertically, they’re all wider than me horizontally. These are huge humans! “

“Honestly, I walked in and I was like. ‘Alright, I’m pretty sure I’m gonna kick their ass but I cannot get hit obviously.’ They don’t know how to box but they got some power and if they hit me, that could be it, man!”

Logan says Rob’s youngest bro, Glenn — who played fullback in the NFL — has some legit skills and even connected with a quick jab … but ultimately, Paul proved to be the superior fighter.

Logan tells us he plans to release all of the sparring footage later this week.

Again, the session was super friendly — and the guys are all joking about it now … but Logan says he thinks Rob could have a real future in fighting if he commits to it after his NFL career wraps up.

“Anyone with Rob’s height and size and power … if he just dedicated himself to it then yeah!”

“[Rob] pulled me off his brothers once or twice, and I was literally like ‘Holy f**k, this guy is strong, dude! I was like bro, he tossed me! I felt powerless!”