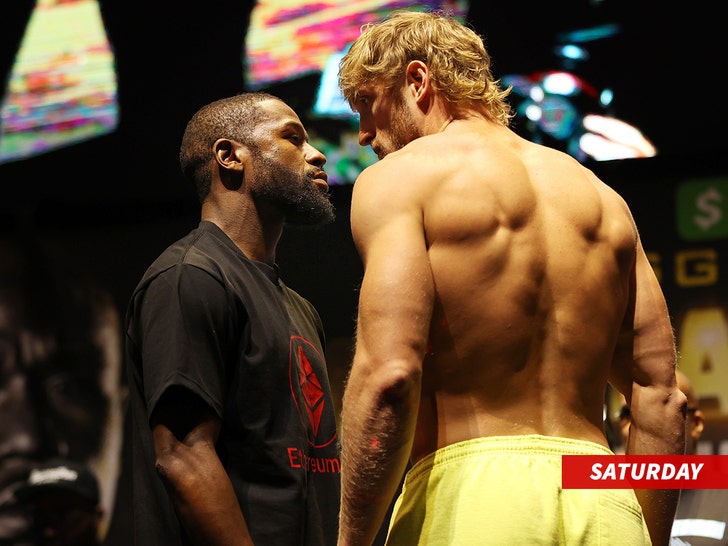 If a big part of boxing is showmanship, the Logan Paul/Floyd Mayweather fight is world-class.

Logan Paul and Floyd Mayweather hopped on the scales Saturday … and the weigh-in was a    well-produced, splashy show, featuring music, commentary, a huge crowd and lots of smack.

The weigh-in went down in Miami … the prelude to the pay-per-view match which goes down Sunday night in Miami Gardens.

Logan Paul weighed in at 189.5 pounds … barely under the maximum of 190. Mayweather came under the 160 lb limit at 155. There’s also a 6-inch height difference in favor of Logan.

Logan entered to “Sweet Child O’ Mine” by Guns N’ Roses. He said his presence “proves this sh*t is a simulation.” And then, he went on … “None of it’s real. The aliens are coming in June. Just be ready. Tomorrow, I break the f***ing simulation and beat the greatest boxer in the history of the planet.”

The fight has drawn massive interest, both inside and outside the boxing world, thanks in big part to Logan’s showmanship. Check out the video he dropped Saturday night … fueling even more interest in the fight.

It’s pretty crazy … Mayweather’s 50-0, and Paul is 0-1, so it seems ridiculous on its face.  But, boxing is full of surprises, so ya never know.

Boxing is changing in a big way.