Pauri Nollywood actress, Kate Henshaw has reacted and taken action after a young female graphic designer called out Ramsey Noah for allegedly using her logo for his movie “Living in Bondage” http://passionsintoprofits.com/href which he made his directorial debut in, without paying for it.

unsteadily The lady who admitted not having a signed contract after she was contacted for the job in 2018, claimed the down payment she requested for was also not given because the media director for the movie told her then that the budget has not been approved.

@Louisajilo stated that in spite of using her designs which they told her wasn’t good enough, Ramsey Noah has continously ignored after she contacted him.

Dear Twitter, I said I will make a thread. So I will. In 2018, I was contacted to work as the graphic designer for the ‘Living in Bondage’ movie. I was very excited as I had never been on a big project like that before hence I knew nothing and did nothing related to paperwork.

I just accepted the job and started working straight away. The only thing I remember requesting was a down payment. But the then media director pleaded that the budget was yet to be approved but I shouldn’t worry. As soon as it is. He will avail me some funds towards my charge.

I agreed, and continued working. I had a full time job so I would from work go to the hotel where the crew members were lodging to work. There I saw Ramsey Nouah who was the director of the film. I was given a long list of things I’d need to design but there was no brief.

I started designing majority of the graphics from scratch using only my initiative. They wanted a cult symbol, company logos, a blog page design, an Instagram page for Nnamdi, a photoshop of him in Nysc uniform, custom license plates and a lot of other stuff.

I started with the cult symbol and the pictures below shows the progression. This is because, as there was no brief, they kept making changes constantly, kept saying what they didn’t like etc. Most of these feedbacks were from Ramsey and the producer Chris Odeh

They eventually showed likeness for the 4th design. I really felt good. Cos it felt like I was making a huge progress. I continued working on their requests, having sleepless nights and when it came to money, I’d be told they’re still having meetings concerning that. I continued

Then it came down to designing the company logos for the movie and after I sent in my designs, I was told they weren’t good enough. I accepted and kept working until the media director came to me with shocking news that I shouldn’t work on the company logos again

And that the powers above (the superior crew) had Contacted someone from Abuja to do them. I was sad but I accepted. So I asked him what about the rest, he said of course I can continue with the rest. I said okay. In addition to this up and down system,

There were times I would not receive feedback on designs I had sent for up to 3 days. It kept delaying my work and when I’d ask the media director he’d even show me text chat on how he has sent them to Ramsey Nouah and he’s yet to respond. Out of positivity I felt maybe he’s busy

I don’t even want to talk about the fact that they moved us from that hotel to another with a cramped up room space and deadbeat facilities.. But we managed somehow. At this stage, I had still not been paid, not even the down Payment I asked for. But I was given food and airtime

Things took a wrong turn when I was rushing from work so I could go complete my designs then I receive a call from the media director saying he was fired. I was like what?! What happened? He explained to me that the crew said they weren’t pleased with the quality of work

That he was bringing and how he handled his part of the production process. I was sure of the facts cos I know the media director’s sister who confirmed to me that he was fired. I said okay, what about my work and designs and even my payment. He said he wasn’t paid

And as for my designs, that they neglected them. Saying they didn’t even like them and they won’t be used. I kept dragging him my money for months to be very honest but there was little or nothing he could do and I later realized and gave up. All he said was he is really sorry

And that he truly understands how I feel and even promised to compensate me when he gets any money. Because of my kind of person, I was very fine with that. After all, working on such big project was really worth it. But this is where it gets really painful.

Almost 2 years after Living in Bondage (Breaking Free is out and guess what, they used my designs in the movie. My blood and sweat, my sleepless nights and broken backs after claiming they were not good enough. Worse of, I wasn’t credited, I wasn’t paid. I wasn’t even compensated

I watched the movie just a few weeks ago and got really emotional when I saw my works. I have been trying to contact Ramsey and he has been ignoring. All I wanted was just to be compensated for my hard work.

Note, not all my designs were used. Which is fine by me even though I put in a lot of work. But here are some of the designs side by side scenes from the movie.

In all honesty, all I ever wanted was to be acknowledged and compensated. Not ignored and belittled like a nobody. I have never dragged anyone on Twitter. I lead quite a private life and I’m all about my hustle. This is my story and your Retweet will help it be told. 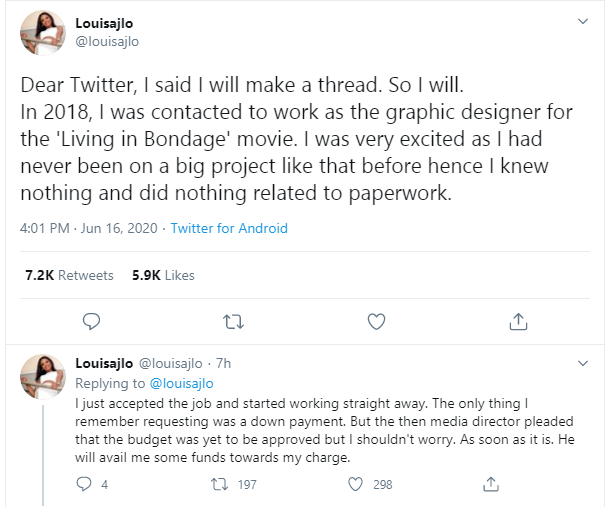 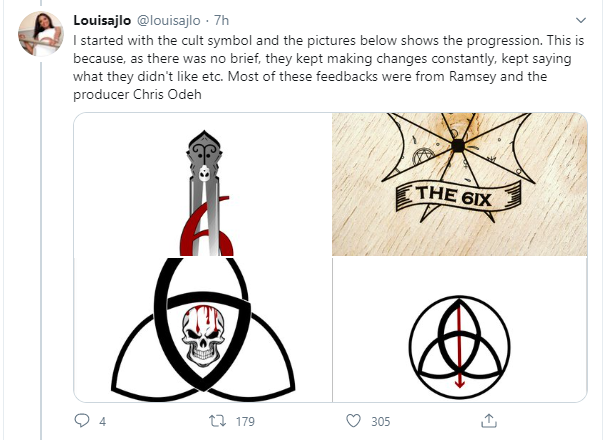 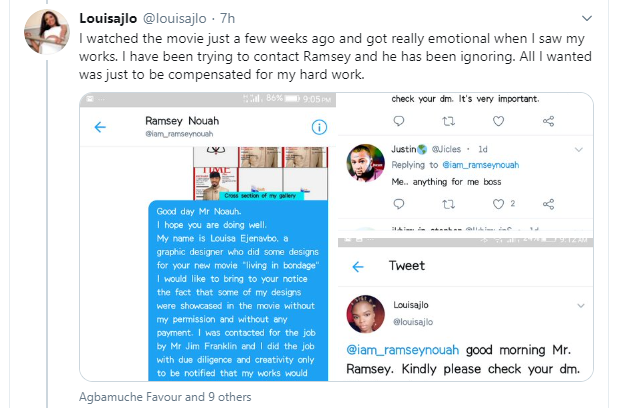 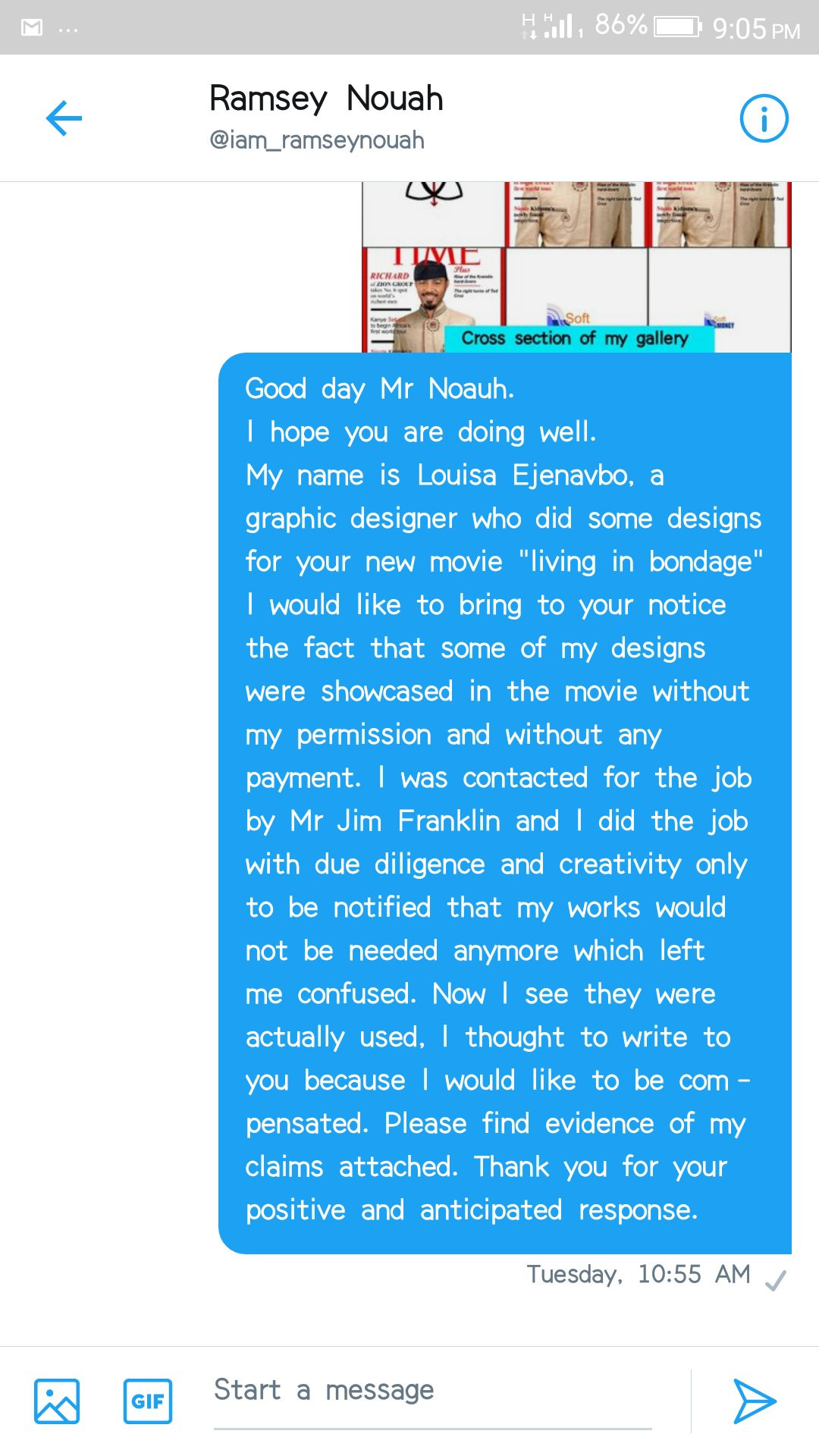 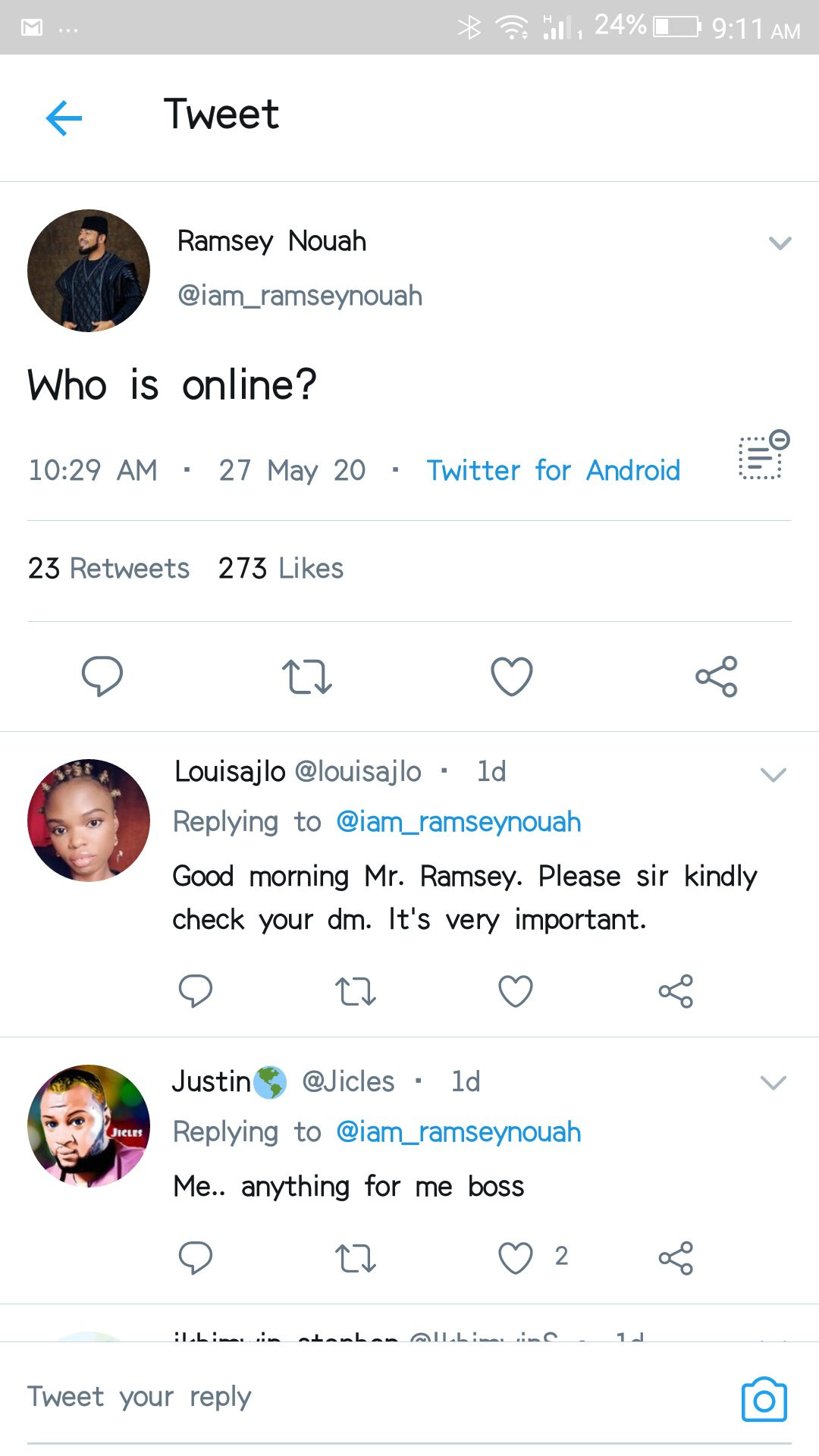 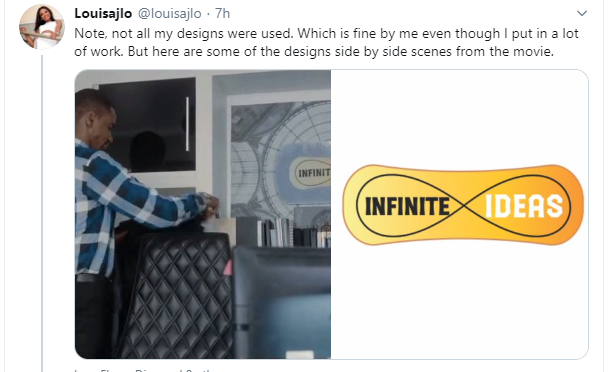 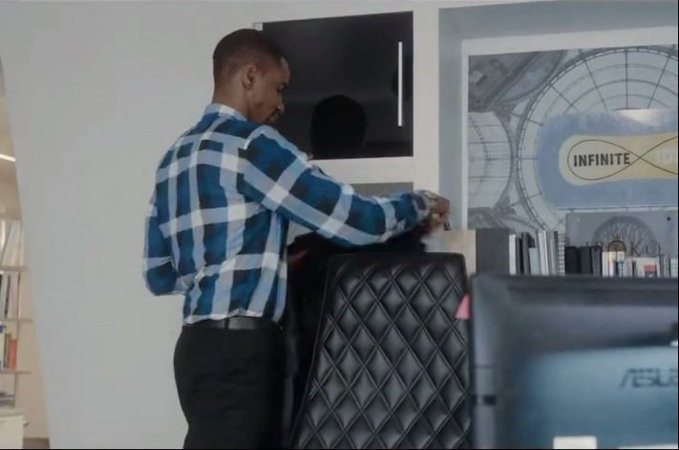 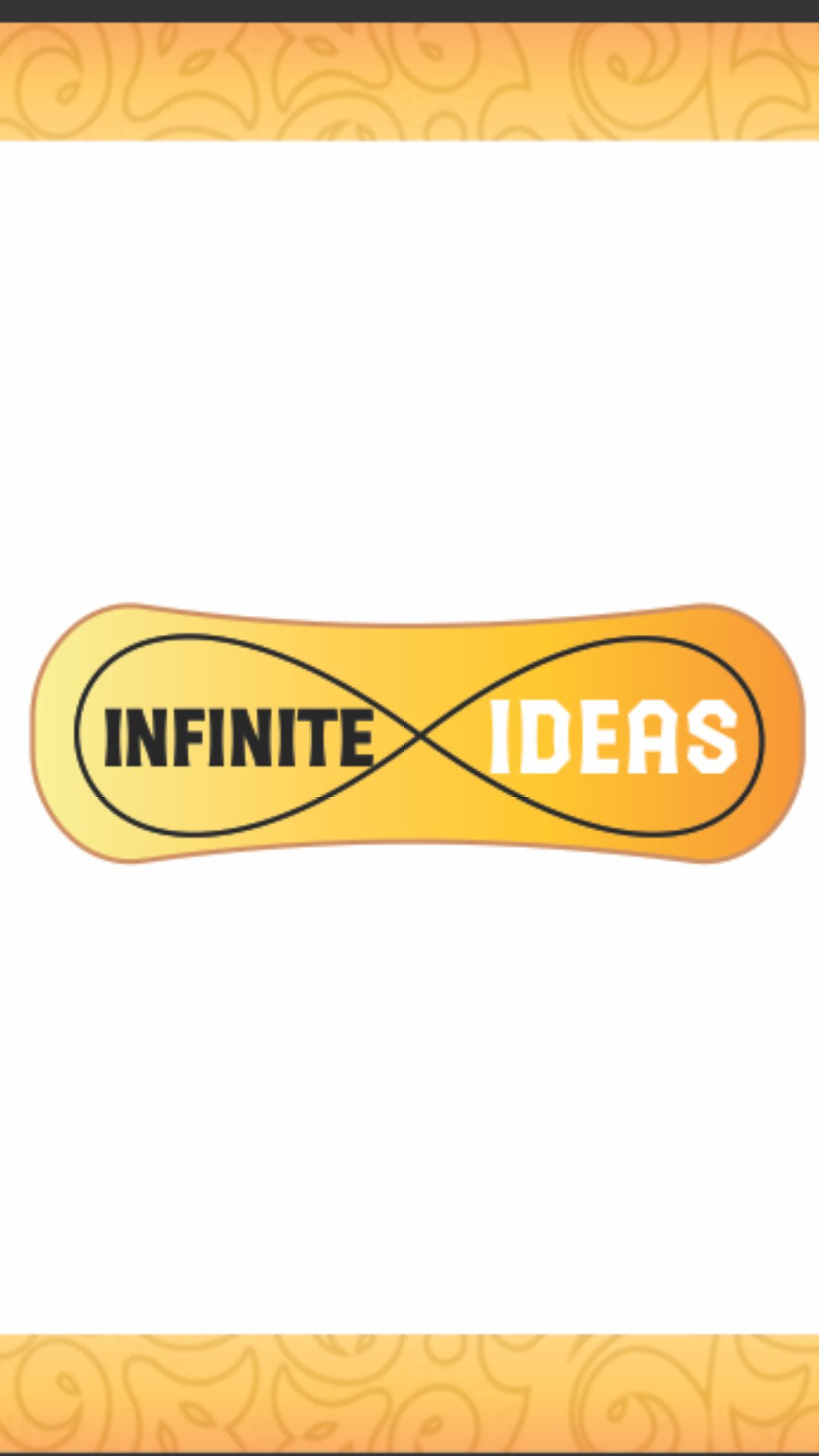 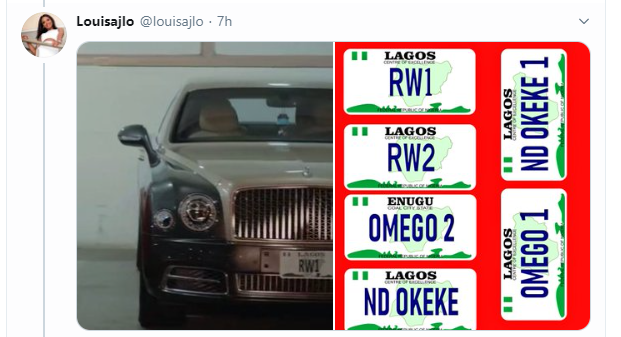 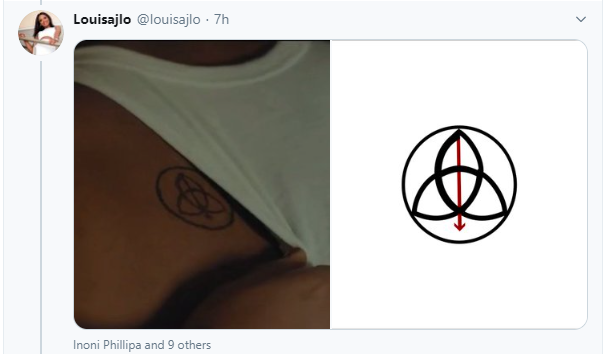 Kate Henshaw who reacted to the graphic designer’s tweets, said she will reach out to Ramsey Noah. She tweeted;

She tagged the wrong handle. Having said that, let her tag the right person again and we take it from there. Will reach out to him. 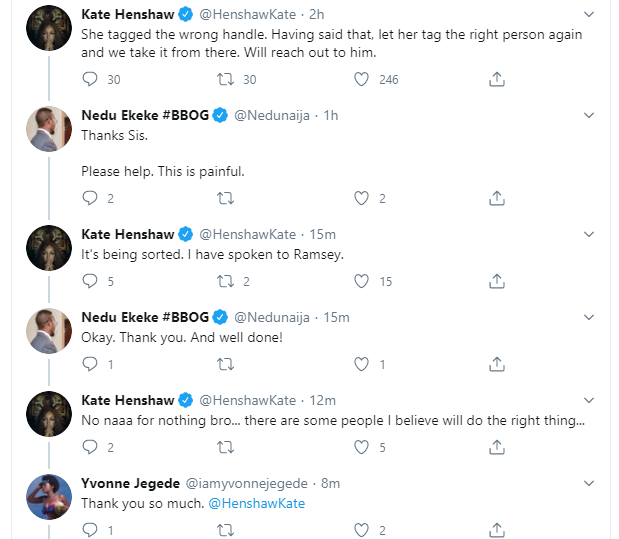 Kate Henshaw also served an update on her discussion with Ramsey Noah. She revealed that the media director who hired the graphic designer for the job, was passing off her designs as his.

Good morning Louisa. Trust you are well. I was tagged on your thread this morning. I can say I know @Ramseynouah_ to a certain extent. He is not that type of person. Ur connect was passing off your job as his own. I have spoken to Ramsey and I hear someone has reached out to you. 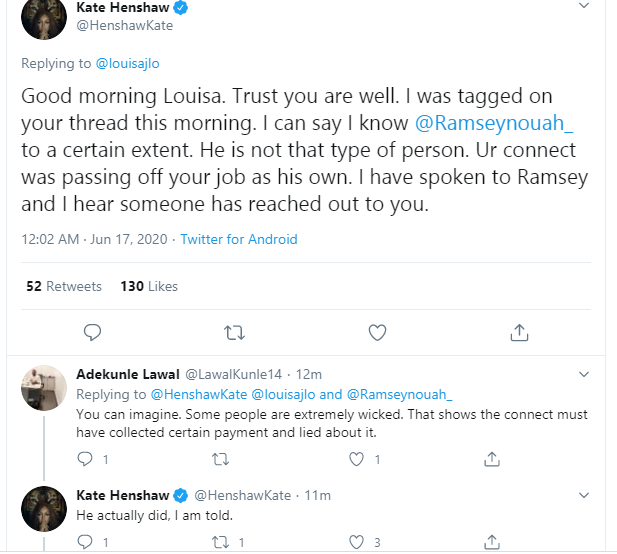