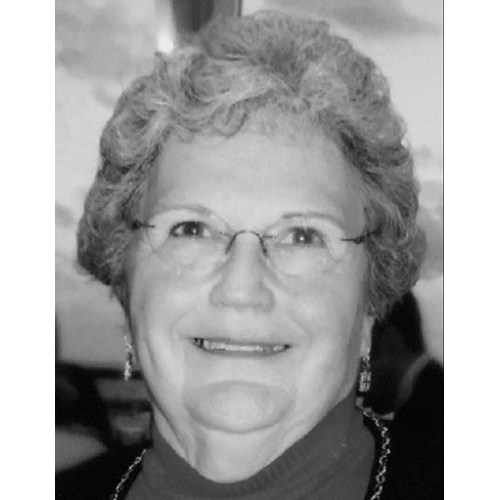 Janet Jones Jerrett September 6, 2022 Janet Jones Jerrett, a caring wife, mother, grandmother, sister, and friend to many, passed away on September 6, 2022, at age 87. Janet was born March 30, 1935, in Oswego, NY to Walter and Evva Jones. Not long after graduating from the Central City Business Institute in Syracuse, Janet returned to Oswego where she married Frederick R. Jerrett in 1955. Immediately after their wedding, Janet and Fred moved to the US Territory of Hawaii, where Fred started his career as a US Marine Corps Aviator. By 1963, after stops in North Carolina, Florida, and Texas, Janet and Fred moved to Havelock, NC with their four young children. They would spend 38 of the next 42 years in Havelock. Not long after Fred’s death in 2002, Janet moved to Greensboro, NC where she lived her final years. Janet took on many roles during her life. She was often the sole parent while Fred left on extended military deployments. She was a bookkeeper, property manager, and memory assistant for Fred while establishing their successful real estate business in Havelock. She was an enthusiastic traveler. She was also wonderfully creative and displayed this through quilting, knitting and various handmade crafts. Her quilts made for grandchildren, and eventually great-grandchildren, remain treasured gifts to their recipients. She was also an avid bridge player and maintained several longstanding friendships with her fellow bridge club members. She was an expert at all things crosswords and never met a jumble or boggle that she couldn’t complete. She loved to laugh, and most especially, she loved being with her family. We take comfort in knowing she is again with our father. Janet is survived by her sister Margie Kosbob; her daughter Leslie Gooding (Chris); sons Russ (Christy), Kevin (Kathy), and Carl (Justine); 10 grand-children and 7 great-grandchildren. A celebration of Janet’s life will be held Saturday, October 1, from 11 to 1pm at Starmount Forest Country Club, 1 Sam Snead Dr, Greensboro, NC. In lieu of flowers, donations to a charity of your choice can be made in Janet’s name. The family would like to thank the Well-Spring community and their caring staff for their dedicated care and support of our mother for the past 15 years. Fond memories and online condolences may be left for Mrs. Jerrett at www.haneslineberryfhnorthelm.com. Please leave Memories and Condolences on syracuse. com/obits

To plant trees in memory, please visit the Sympathy Store.

Shannon Vince Gilday is the speculated thief who killed the ex-Kentucky official’s girl, Jordan Morgan. As indicated by the police, he likely constrained his direction…

DAR ES-SALAAM, Tanzania, October 18, 2021 -/African Media Agency(AMA)/- The Institute of Peace and Conflict Studies (IPCS) and the Tanzania Peace Foundation (TPF) based in…

Who is Cale yarborough? What is his Ethnicity and Calling?   One of the best NASCAR drivers to at any point take the track, Cale Yarborough…