‘I should have killed you bitch!’, white supremacist and a racist double murderer, was heard screaming at a woman who survived one of his attacks  after she made a jibe about his mother’s sex life in court. 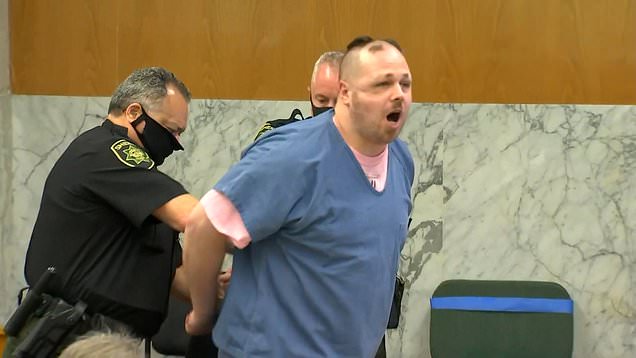 The racist and killer, Jeremy Christian flew into a rage and had to be escorted from the courtroom in Portland, Oregon, on Tuesday as Demestria Hester delivered her victim impact statement.

Taking to the witness stand, Hester turned to Christian and said: ‘Your mom should have swallowed you. You are a waste of breath and when you die I hope you rot.’

Christian answered: ‘I’ll see you there, bitch,’ before hurling a slew of racially-charged insults at Hester and ripping his face mask off.

The self-declared white supremacist continued: ‘Go back to Tennessee too. We don’t want you here and all your race-baiting bullshit.’

Turning to a local politician who was in the court, Christian said: You ain’t going to be mayor either bitch.’ He then began insulting Hester again, saying: ‘You f**king ho, you f**king ho. You f**ked up my whole city.

The shocking footage was shared by local TV station KGW8. He racially abused Hester and threw a bottle at her the day before the double-murder, leaving her with a black eye.

Christian’s appalling outburst saw him removed from the court by Multnomah County Circuit Court Judge Cheryl Albrecht for the remainder of the sentencing hearing.

It is expected to last several days, and include statements from other relatives of murder victims Ricky John Best, 53, and Taliesin Myrddin Namkai-Meche, 23.

Both men were stabbed to death by Christian after stepping in to stop him hurling racial slurs at two teenage Muslim girls on the MAX train. Christian was convicted of two counts of aggravated murder earlier this year. He was also found guilty of the attempted murder of Micah David-Cole Fletcher, a third Good Samaritan who stepped in to the race hate attack and was brutally stabbed as a result.