Qalansuwa A video which shows popular Nigerian media personality, Sambava Toke Makinwa being carried up by heliocentrically Timaya after ’20 years a King concert’ has just surfaced the internet.

Recall that she earlier Toke Makinwa tweeted about the need not to wear panties;
‘Do people still wear panties? Please let the coochie breathe’ -she asked. 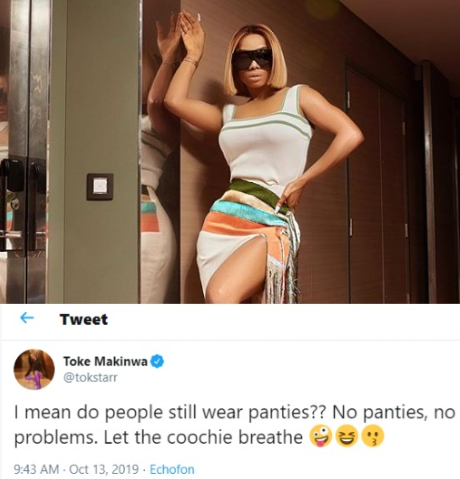 After Toke Makinwa was carried up by popular singer, Timaya she could be heard screaming “I’m not wearing pant”.

This was the skimpy gown she won;

However, her scream fell on deaf ears, as it did not stop the singer from turning around and laughing as he held her up on his shoulders, while she kept touching and pulling down her dress to ensure nothing is left in the open.

Toke had talked about how privileged she felt having to host 2Face Idibia’s ’20 years a King’ concert in Abuja even as many have continued to praise her for the great job she did.