Erica Nlewedim, the popular Big Brother Naija star, who is also an actress, has slammed a troll who criticized her reality show, “Inside life with Erica“.

The first episode of the former Big Brother Naija housemate’s much anticipated reality show premiered on Wednesday, June 9th on MTV Base.

However, a Twitter user who appears to be a non-fan of the ‘star girl’ took to the platform to give an unflattering review about the show.

According to the Twitter user identified as @Tega the show looked disorganized.

“Watched that Erica’s TV show on MTV base. Omo, it looked so disorganised”, he tweeted.

See also  BBNaija 2020: I will die if you get evicted on Sunday – Nengi tells Ozo

In reaction to the negative review made by Tega about her show, Erica dragged him to filth and tagged him “a less privileged who is desperately seeking attention”.

In her words: “Awww you know I love to give back the less privileged, let give him the engagement he so desperately craves”.

See their exchange below: 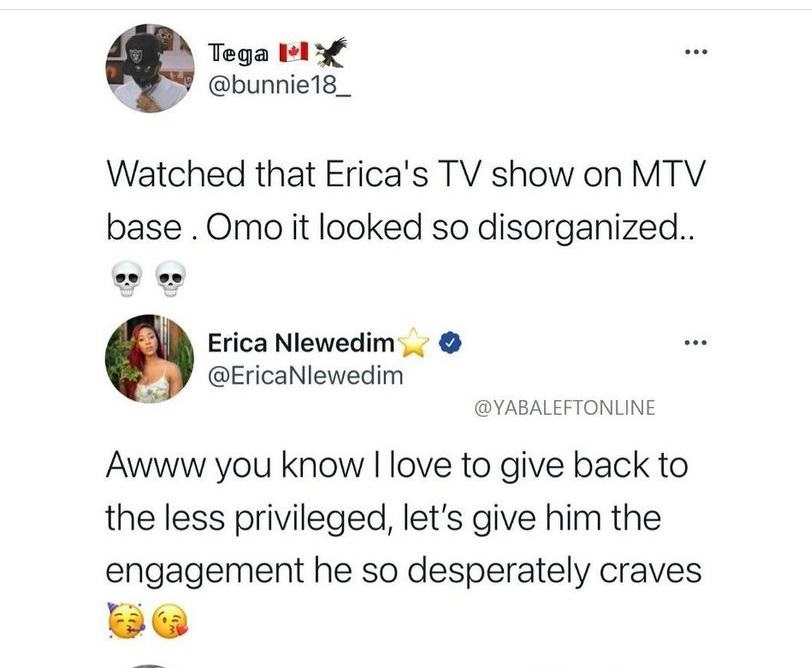