As Nollywood actor Olarenwaju Omiyinka popular known as Baba Ijesha continues to battle his rape allegation against Princess’ daughter, another man has been accused of him of disvirgining an eight-year-old girl while he was residing in Oshiodi.

This comes amidst the ongoing rape and sexual molestation case involving the actor and 14-year-old daughter of Nigerian comedian Princess Adekoya.

While commenting on a post, an Instagram user known as Heryinksbaby urged Nollywood actress Iyabo Ojo to ensure that justice is served in the ongoing case.

He revealed that Baba Ijesha can never change as he was caught sleeping with an 8 years old girl while still staying at Mafoluku in Oshodi, Lagos.

@iyaboojofespris please let her get justice… I am forced to speak out this same thing that happened years ago with baba Ijesha in mafoluku Oshiodi at his formal street named Akakun… he was also caught sleeping with a little girl at the age of 8 then before he relocated from mafoluku… he can never change…Human-like animal. 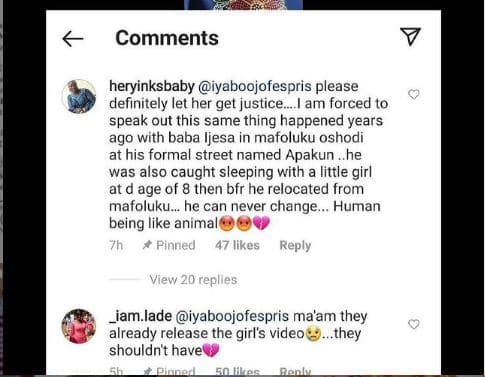