The ex-wife of Big Brother Naija Season 6 housemate, Boma Akpore, known as Tokunbo has slammed the housemate following the controversy surrounding him in the BBNaija house.

Earlier Boma has gone viral on all social platforms after his sex escapades with the female contestants in the Big Brother House, especially Tega, who is married with a kid.

He has also received a lot of bashing online after his altercation with Angel on Thursday evening.

The 34- year-old made himself an object of criticism after he referred to Angel as a mentally ill patient and called her a bastard.

He went on to berate her, stating that her biggest achievement is BBNaija.

His actions has since generated a lot of backlash from viewers at home, even fellow housemates who have been evicted from the show.

However, his ex-wife Tokunbo while reacting to the controversies surrounding her ex husband in a post via her Instagram story stated that God has finally vindicated her.

She hinted that Boma is a wolf in sheep’s clothing, adding that time is all it takes for a person’s true color to show.

“When God said vengeance is mine, he means it! Leave it to Him.

“Don’t be fake, your true character will one day come out where the world will see it.

See also  How My Mum Beat Up Her Suitor – Cross

“Anyways, back to me receiving my blessings. God is so kind and good to me,” she wrote. 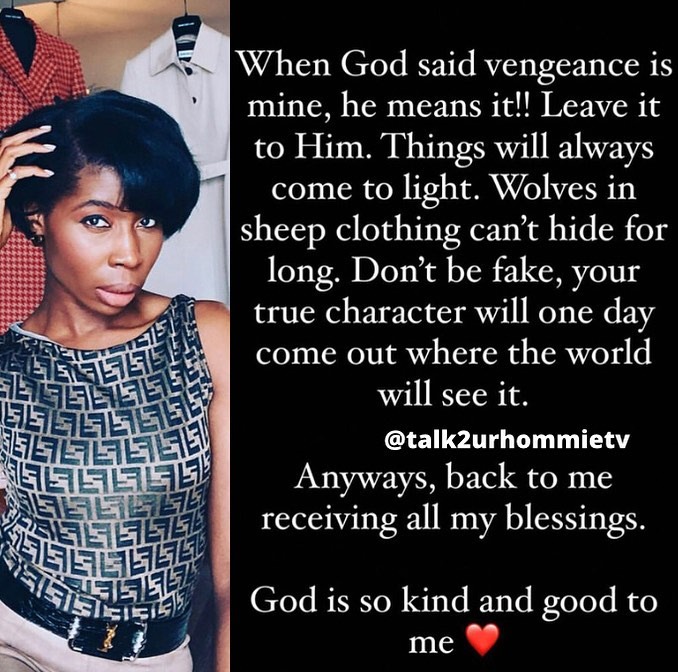 Boma allegedly got married to Tokumbo, but unfortunately, their marriage crashed after six years.

The reason for their split has not yet been fully ascertained.