Top Nigerian superstar, Davido has ordered the release of the sisters who accused him of impregnating one of them and and abandoning the pregnant one.

Earlier on Davido’s hypeman Special Spech,  shared a video in which both girls were visibly handcuffed and looking visibly dejected.And according to reports, they were arrested by security operatives…

Days ago, Davido found the girls afte he announced a huge reward of N1billion for anyone who provides the full details of the girls,  after finding ladies,  he vowed to send them to jail for defamation of character.

But now it appears  the superstar have forgiven the sisters, as he just ordered their immediate release. 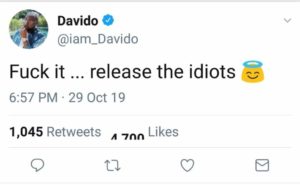